In this second instalment of the new weekly series, I’ll be sharing my analysis on three altcoins selected by you on Twitter. All you have to do to have your coins featured is tweet me their cash-tags with #ThreeCoinThursday, so I can keep track.

For this second instalment, I’ll be covering $RSR, $APL and $CELR: 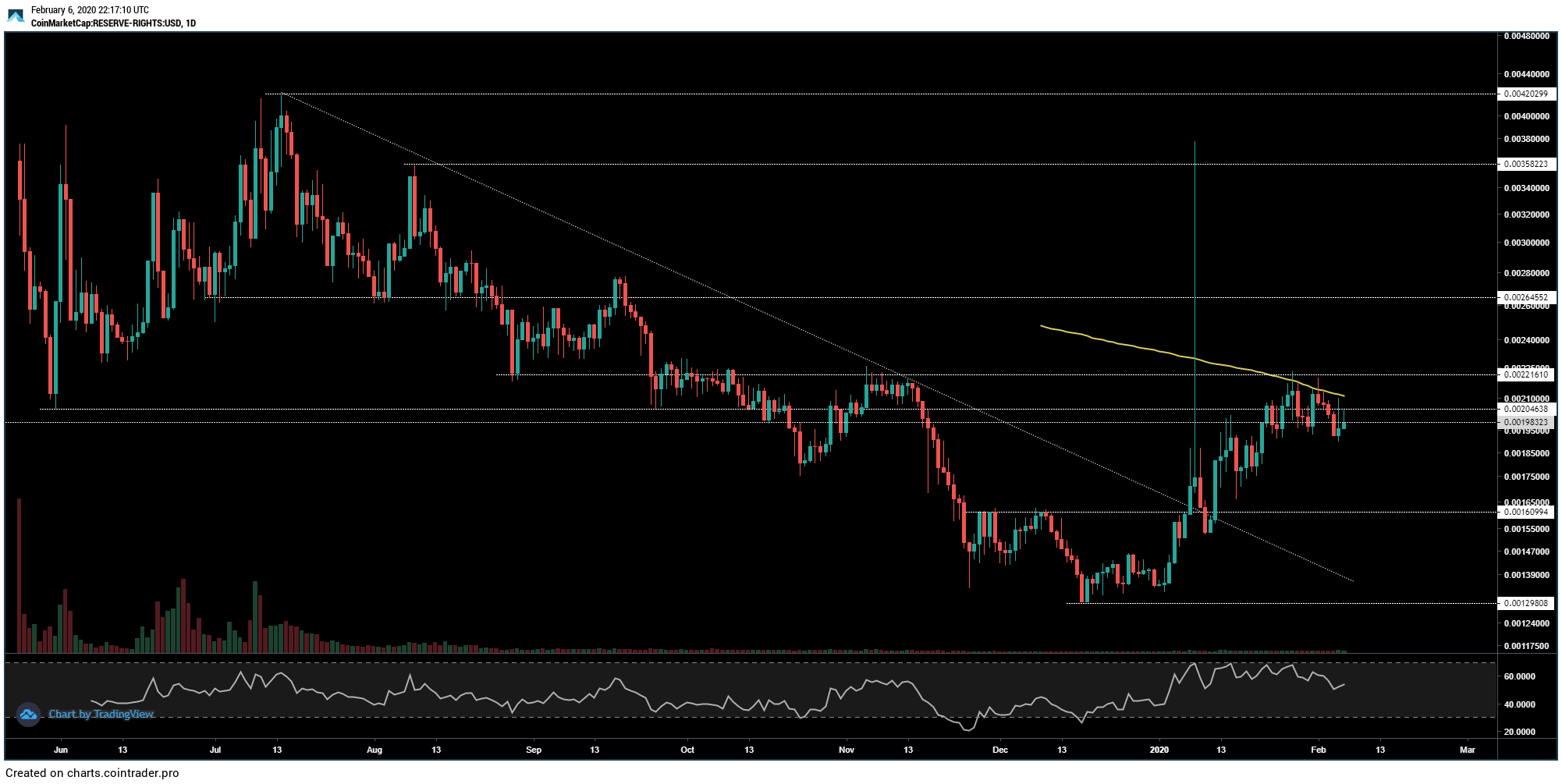 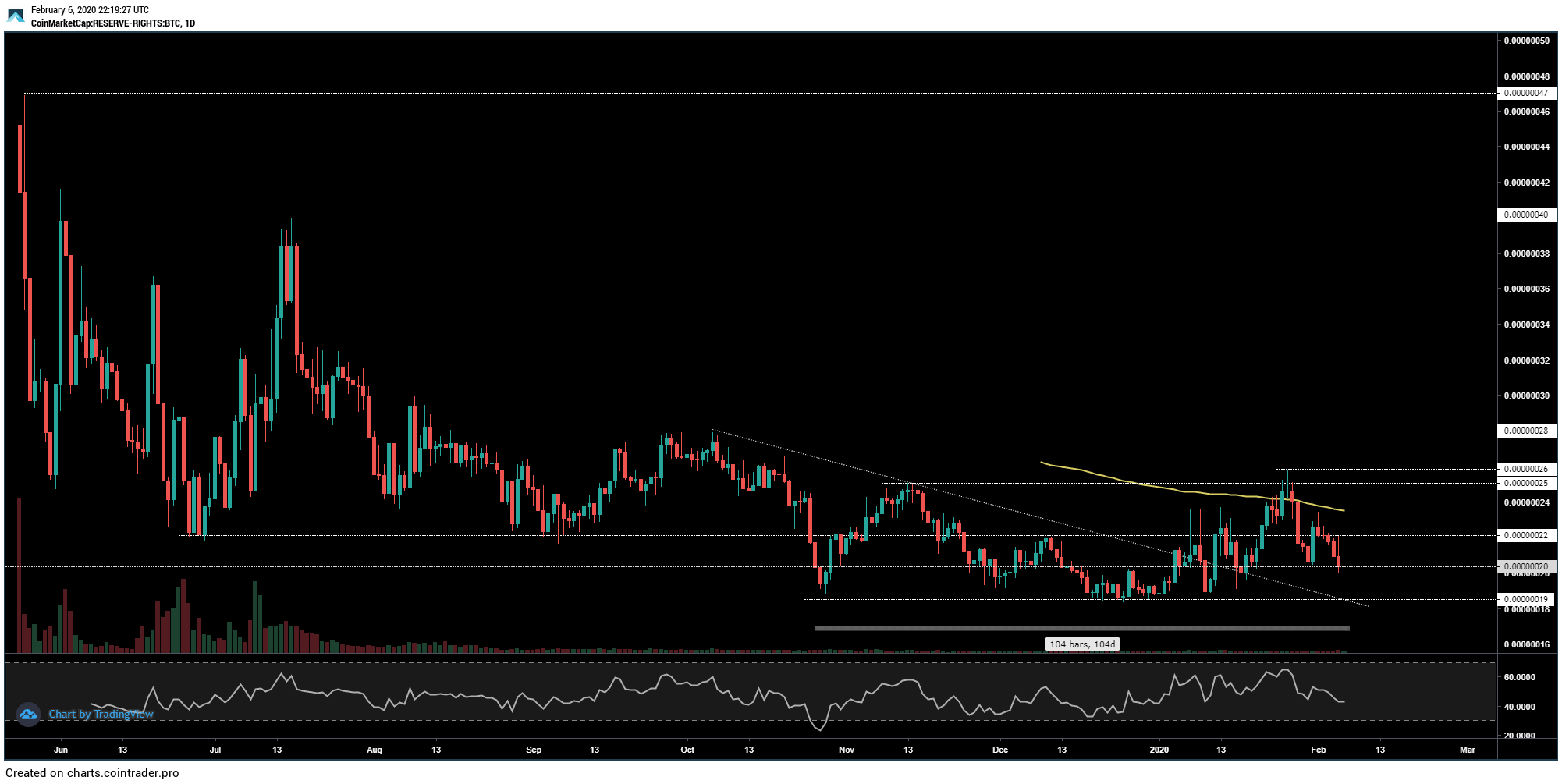 So, Reserve Rights was a popular choice among those on Twitter but the token has not been in existence for all that long, hence the omission of a Weekly chart for its BTC and Dollar pairings. Instead, I’ll focus solely on the Daily charts here, as they provide plenty of context and we are able to clearly see the entire price-history of the token.

Beginning with RSR/USD, we can see that the vast majority of its existence has been spent in a downtrend, with price having originally touched lows of $0.002 shortly after listing before bouncing to highs of $0.0042, which remains the all-time high to-date. Following this, from July 2019 onwards, Reserve Rights was subject to consistent bleeding, falling to fresh lows every month, eventually breaking the then-all-time-low of $0.002 in October and not ceasing its fall until December, where it hit $0.0013. Moreover, as we can see, volume has been low since inception. More interestingly, price formed resistance on the fall at $0.0016, which, as of 2020, was breached violently; so too was the trendline resistance that preceded capitulation. This is a promising sign and price has climbed gradually since, but is now stalling at significant overhead resistance: the 200-day moving average and the prior support turned resistance between $0.002 and $0.0022.

Turning to RSR/BTC, the story is very much the same, although the downtrend not quite so pronounced; in fact, surprisingly, RSR has only traded within a 2.5x range its entire existence, with its all-time high forming upon listing at 47 satoshis and its all-time low and current range support forming at 19 satoshis from late October. Significantly, price has been holding this base for 104 days, failing to find new lows. Again, price broke out above short-term trendline resistance in January but the follow-through has been rather lacklustre, with price stalling at 25 satoshis, near the 200MA. I would be very interested in buying a retest of 28 satoshis if we see a breakout on strong volume above that resistance. 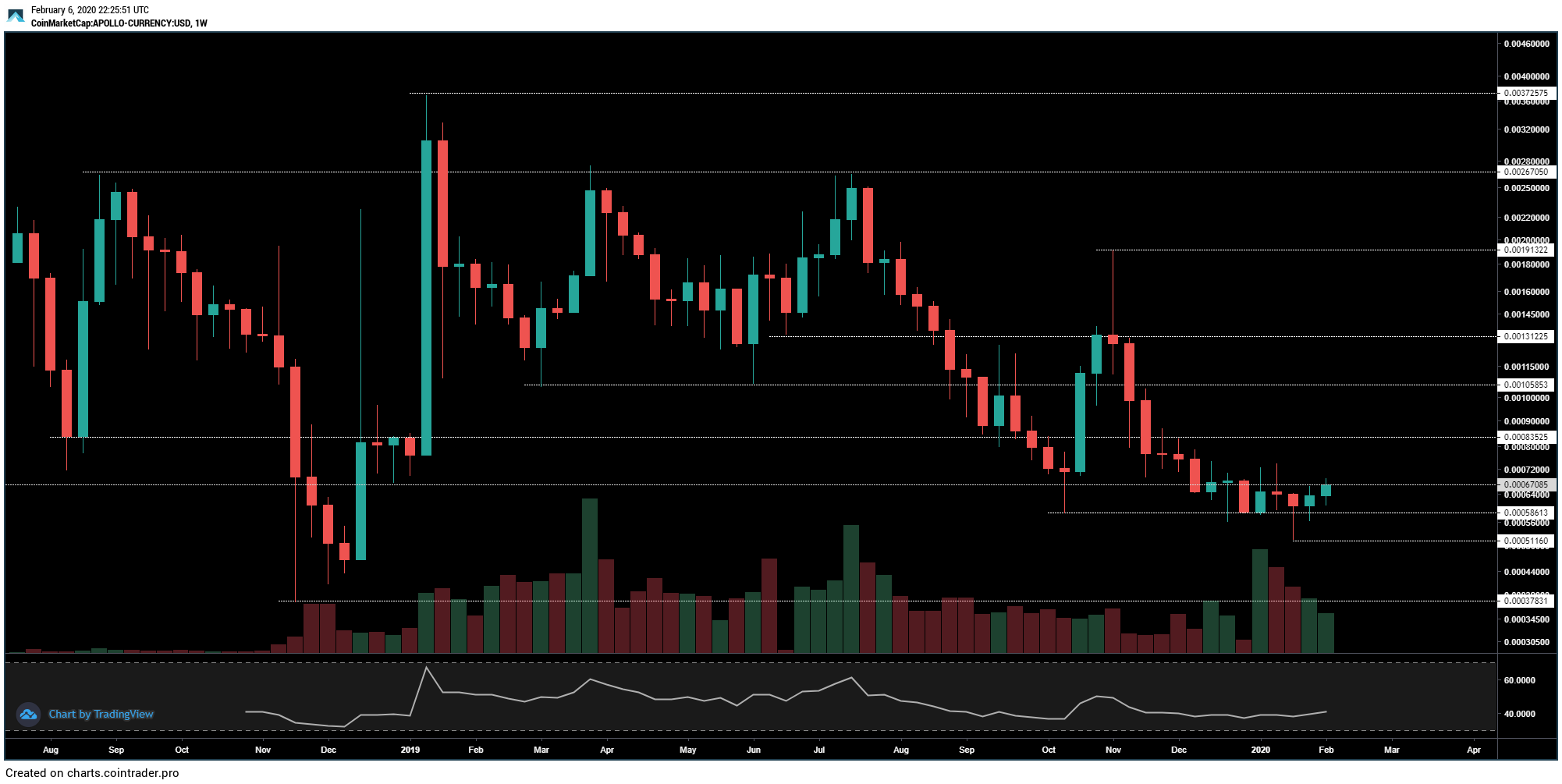 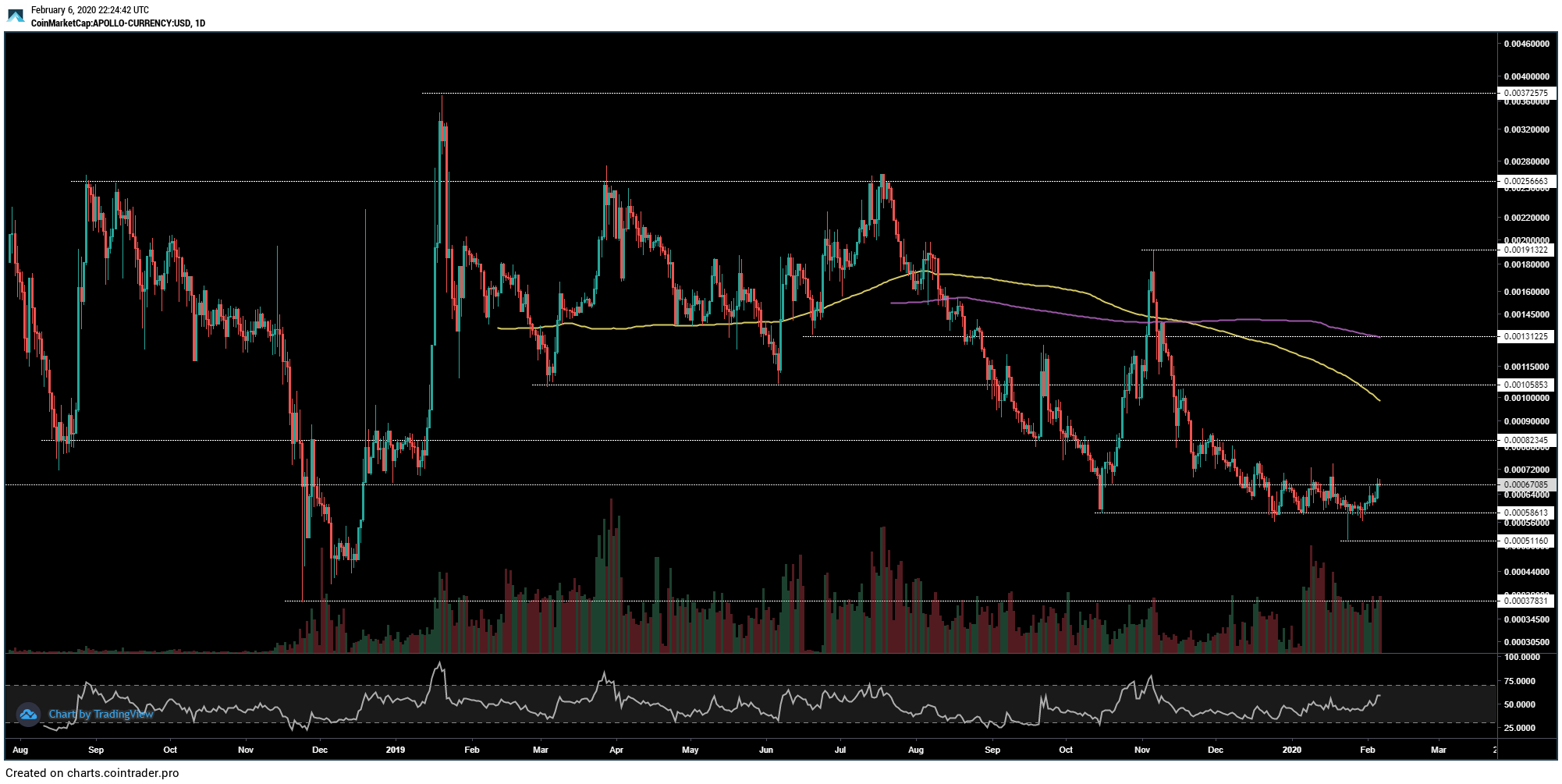 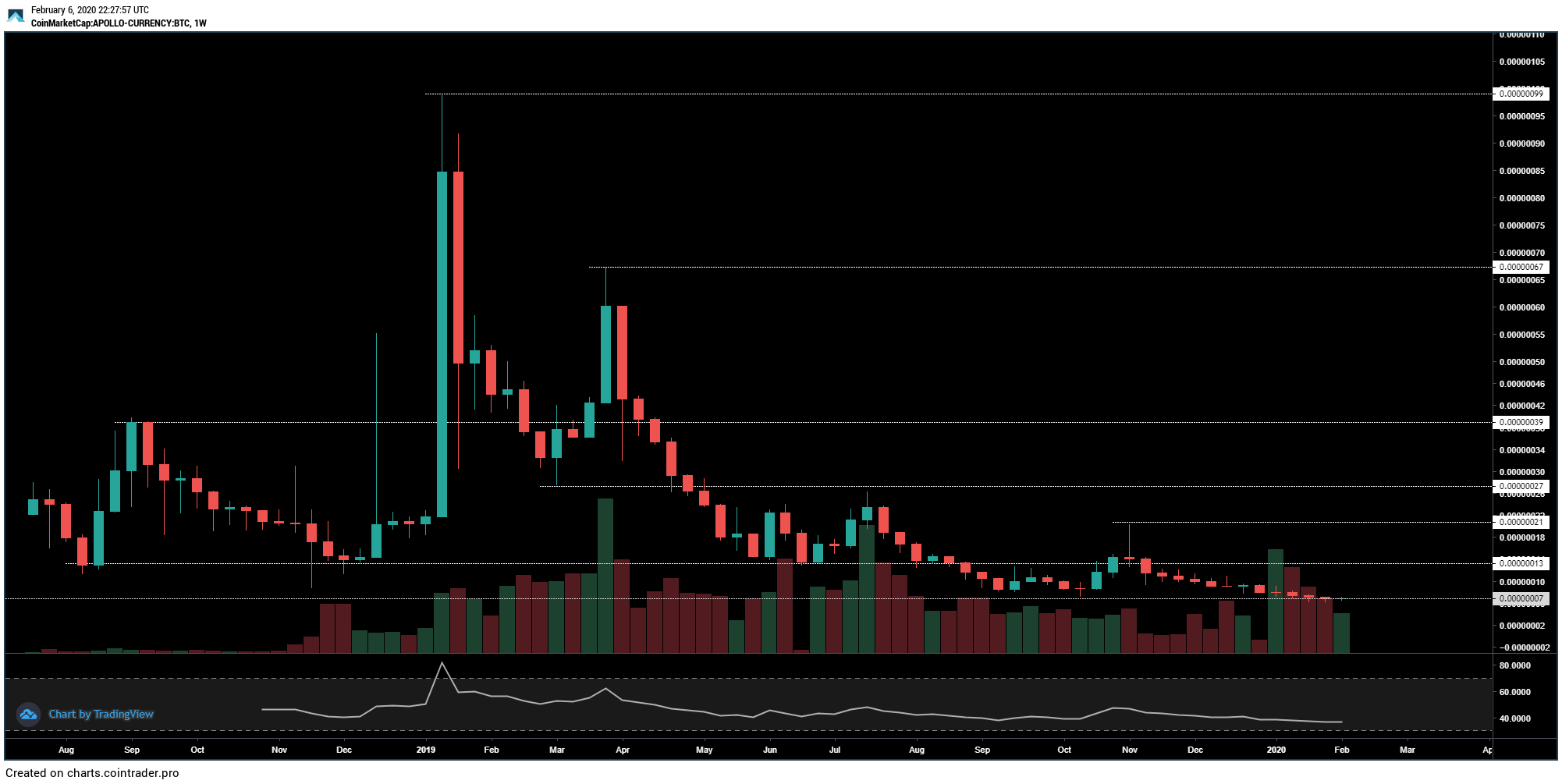 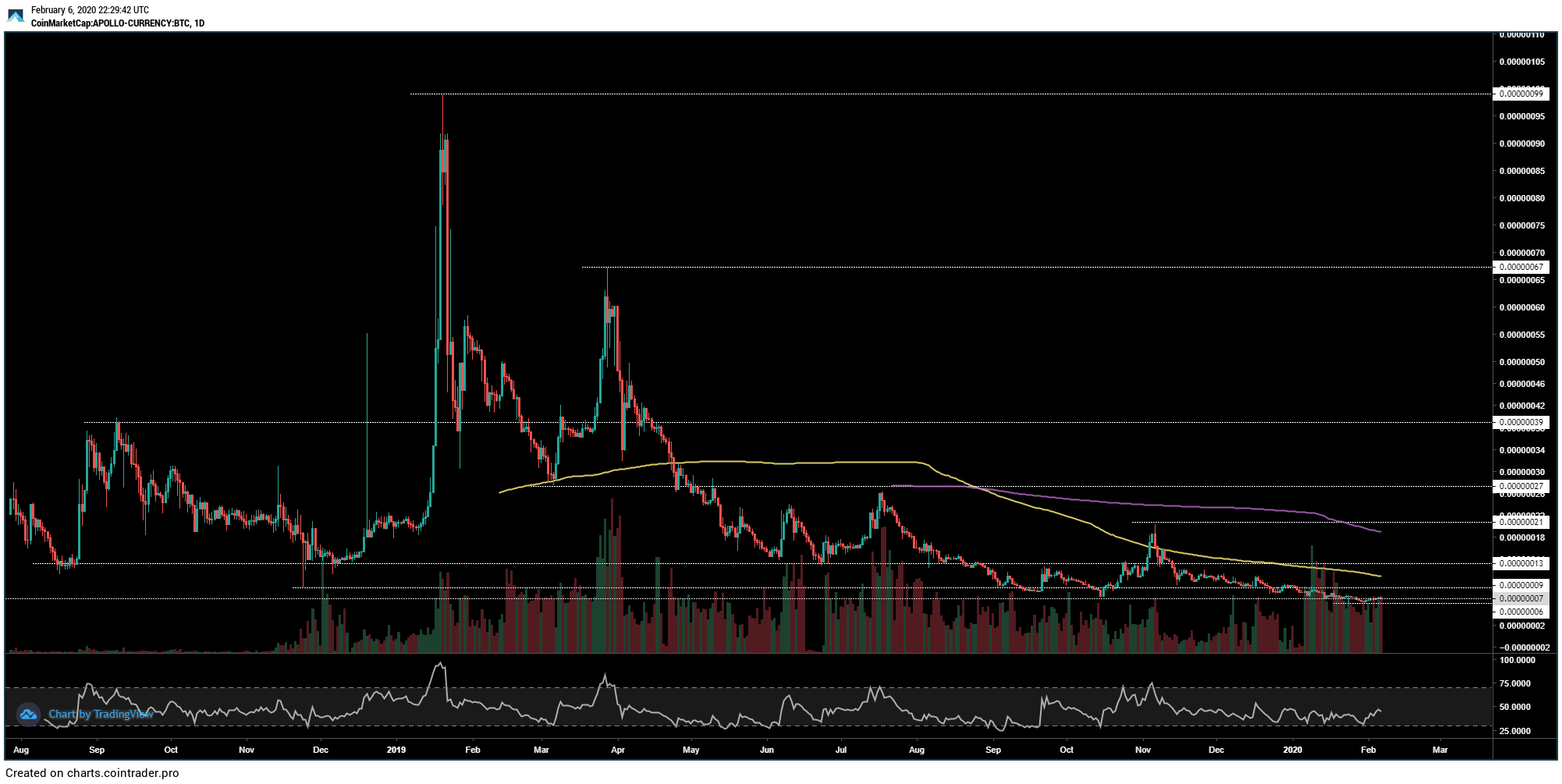 Apollo Currency has been in existence for a little over a year now and appears to have found a bottom against the Dollar.

Beginning with the Weekly chart for APL/USD, we can see that upon listing the token hit $0.00267, before falling to all-time lows that remain intact in November 2018, around $0.00038. This led to the token’s first bull cycle, with price climbing 1000% in a few weeks and forming the current all-time high of $0.0037. Subsequently, the pair spent a lot of time in consolidation, range-bound between support found at $0.001 and resistance around $0.0027; this was in play for almost half a year. We then see a clear breakdown and several weeks of selling, as the double-bottom at $0.001 gave way, culminating in a low of $0.00058 in October 2019. Interestingly, the Weekly has failed to close below that since, despite spending several weeks forming a base around it since December, with one Weekly candle even printing a strong swing-failure of $0.00058 as it wicked to $0.0005. Volume is currently declining throughout this consolidation and I would wait for a reclamation of $0.00083 before thinking the bottom is in.

Turning to the Daily, there is actually surprisingly little to add here, as many of the levels remain the same. I would add that the swing-failure clearly also occurred on the Daily back in January and the rally since has taken price towards short-term resistance around $0.00072. Again, I would be looking for $0.00083 before looking to buy, but it does appear that a bottom is forming here. The 200MA remains far overhead and the 360MA sits at $0.0013, almost twice the current price.

Looking now at APL/BTC on the Weekly timeframe, we can see that price originally formed a swing-high in August 2018 at 39 satoshis, before bleeding down towards support at 13 satoshis, above which the Weekly remained, failing to close beneath it throughout that Winter period. Price then rallied hard for a few weeks, setting an all-time high in January 2019 at 99 satoshis, which remains intact. Since then, price has been in a slow bleed, falling back to 13 satoshi support in June 2019, which did hold once again for a while but gave way in August. New all-time lows followed and price remains sat at 7 satoshis. There is less to be bullish about here, as price clearly broke down below support and hasn’t found a base yet. I would be looking for the Weekly to close back above 13 satoshis to start to get bullish; it would take a close above 21 satoshis to turn market structure bullish.

Finally, looking at the Daily chart, we can see that 13-satoshi level distinctly, where it has often acted as a pivot for price, hence its significance. At the moment, it appears as though price will continue to bleed to fresh new lows, although the recent uptick in volume and bounce in RSI is mildly positive. Eyes on 13 satoshis; below that, I would not be interested, as you risk price discovery to the downside. The 200MA is flattening out a little now, sat around 11 satoshis. A strong close above both these key resistances is what you should be looking for before entry. 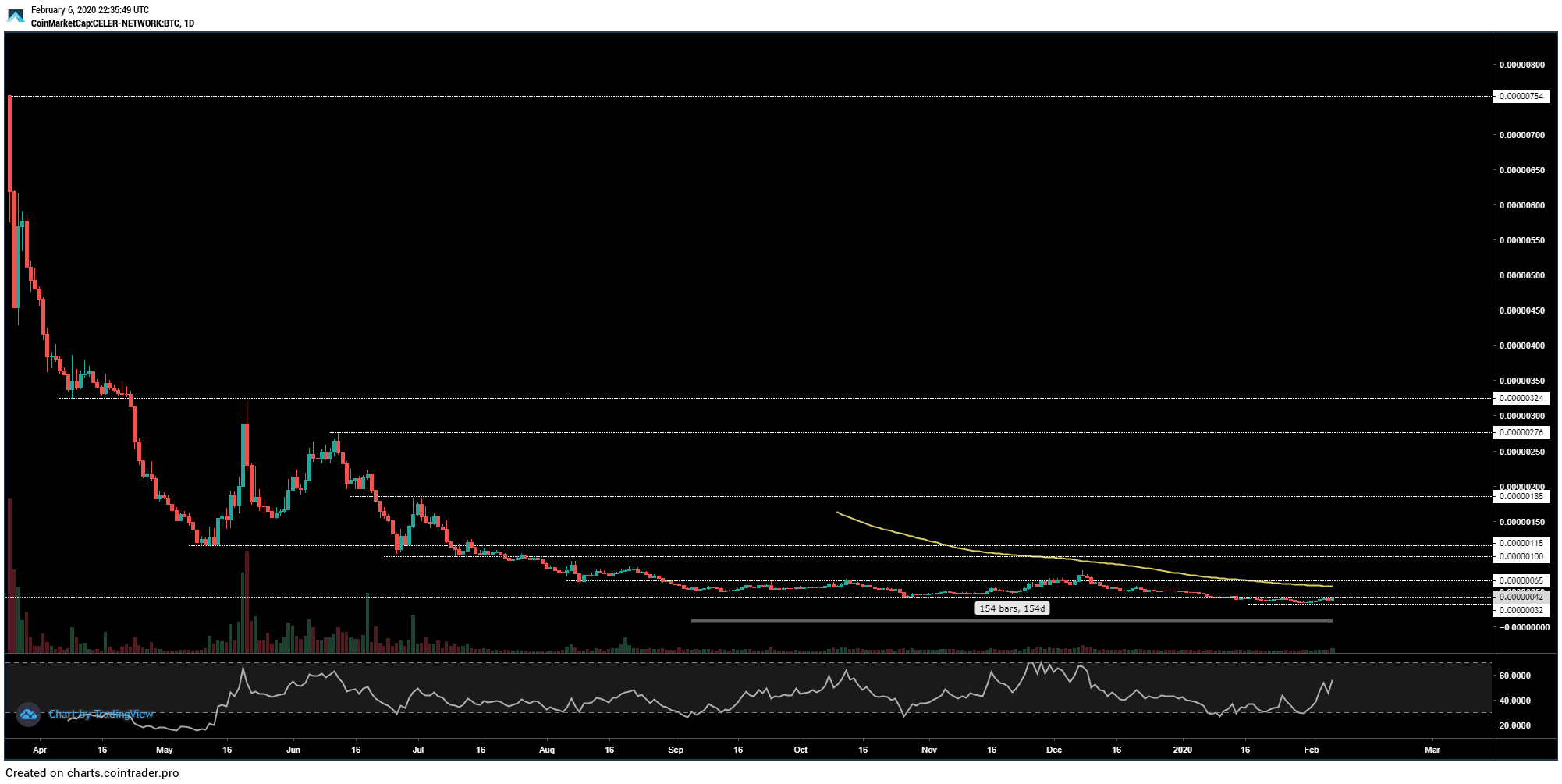 Again, the final of our trio of altcoins, Celer Network, has not been in existence for all that long (though it seems very popular on Twitter), so there was no need to look at the Weekly chart. Instead, I have provided a Daily chart for both its BTC and Dollar pairings.

Beginning with the CELR/USD chart, we can see that price put in its all-time high right upon initial listing in late March 2019 at $0.03, falling violently following this and printing its then-all-time-low at $0.0074 – a 75% drop in a matter of weeks. Price did bounce sharply here, rallying for a number of weeks but ultimately putting in a lower-high at $0.025 and forming trendline resistance in May 2019. Price consolidated above $0.0137 for a whilst, bouncing a little, but again a lower-high was formed at $0.022, with trendline resistance playing its part. From this point, it has been constant bleeding for months on end, with the $0.0074 all-time low being breached in August. This led to fresh new lows week-on-week, culminating in the current all-time low of $0.00318 in January 2020. Price has since bounced ~30%, but much of this is likely due to Bitcoin’s rally, as we shall see. The 200-day MA has never been traded above but looms overhead at $0.0048; closing above this would be the first sign that a true reversal has begun, with price likely to reach for old support turned resistance at $0.0074 following that.

Turning to CELR/BTC, well, the chart is similar to many tokens that launched in the midst of the bear market; no bull cycles and consistent bleeding. That said, following the all-time high being printed at 750 satoshis upon listing, price tumbled fast to lows at 115 satoshis in May; an extreme drop, to say the least. Price bounced to old support at 320 satoshis but this move did not have legs and the 115 satoshi bottom broke down in June, leading to new all-time lows below 100 satoshis. Since then, price has been bleeding gradually, printing its current all-tine low last month at 32 satoshis. CELR had been range-bound between ~65 satoshis as resistance at 45 satoshis as support for almost five months prior to the new lows. The 200-day moving average is flat and right on top of price at the moment, but I would be waiting for a clean break back above 65 satoshis on strong volume before entering, as volume has been extremely low since Q2 2019.

And that concludes this second instalment of Three-Coin Thursday.

I hope you’ve found some value in the read. Remember to tweet me @cointradernik with your coin requests for the next #ThreeCoinThursday.

If you have any questions, feel free to leave a comment!