This seventh Market Outlook comes to you a day early, as I’ll be away tomorrow, but, trust me, it’s a good one; and there’s certainly plenty to talk about. I’ve been off the grid for the past three days, and it seems a lot has ocurred, particularly concerning volume across-the-board. In fact, one of the two smaller altcoins that I’ll be covering has exhibited a similar signal to that of SALT in last week’s Market Outlook; SALT has since moved ~50%. As per usual, I’ll take a look at the past week’s movements in Bitcoin, Monero and Ethereum. The two smaller alts in question are Covesting and FoldingCoin.

Thoughts: Tether, without doubt, played a large part in the price-action over the past few days, with an 8% drop in the ‘stablecoin’ causing a massive spike in BTC/USD on Bitfinex, and a mass price disparity across exchanges. However, news is often just the justification for price-action, and, as I mentioned in Market Outlook #6, we were most definitely due some volatility. This volatility caused a breakout above long-term trendline resistance, with price closing above the resistance on the daily, as can be seen on the first chart. Liquidity was dipped into above recent highs, and price has since dropped off, right back to the trendline. This low-volume pullback and retest seems to be succesful, for now, as price has rebounded a little after the initial retest. The breakout itself was also on the highest volume Bitfinex has had in months.

I have marked out many significant short-term levels on the 4H, to illustrate how often support has become resistance and vice-versa in recent price-history. Given the movements in price and volume over the past few days, it would seem to me that we are indeed on the cusp of a longer-term reversal.

Thoughts: Monero continues to hold the range it has formed, with the movements since August now looking very much like a bottom is in. The initial high-volume breakout above the multi-month downtrend has been followed by a low-volume pullback, and price has now consolidated above $100. This is, of course, the level to watch; any sustained movement below would negate this premise and new lows would likely be imminent.

But, with this range continuing to be held, a breakout to the upside is far more likely, in my opinion. Also, we saw a high-volume buy-up on Bitfinex this past week: though related to the Tether situation, this provides further confirmation that smart money is accumulating within this new range. I’ve marked out a significant level of resistance from this time last year (the final level to give way prior to the bull-run of Dec/Jan)… eerily close to the new support that has formed, isn’t it?

Thoughts: Zooming out on ETH/USD paints a picture of prime opportunity. Price has remained above the 5-month trendline resistance, and Bitfinex just experienced its equal highest volume for Ethereum (both instances within weeks of each other). Around 1% of the circulating supply (~$210mn) was traded during this 24-hour period… on one exchange… ’nuff said. 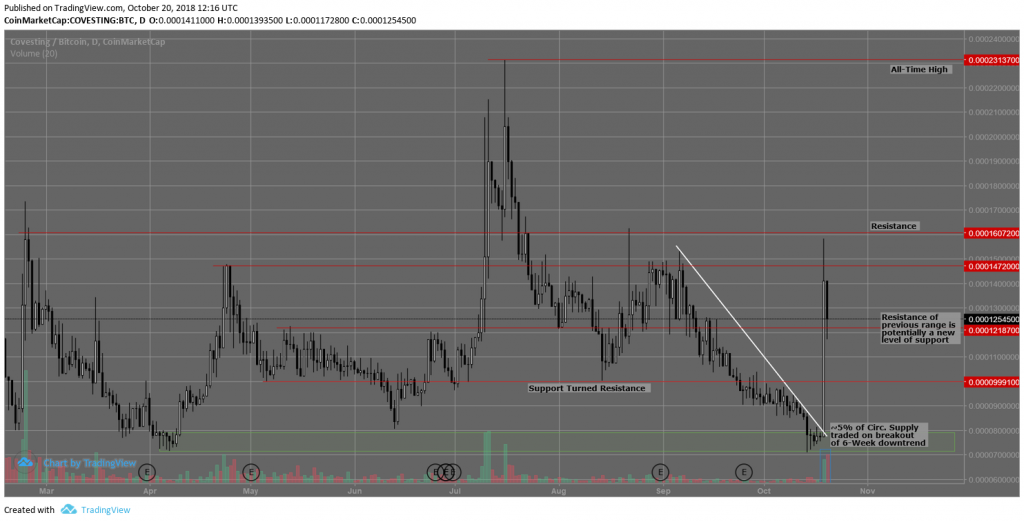 Thoughts: Though these posts tend to stay away from any fundamental analysis, it is important to note that Covesting received their DLT License this past week; that was the news that acted as the catalyst for a breakout on high volume from a former accumulation range. The breakout comprised of around 5% of circulating supply being traded across a couple of days, with a strong daily close above recent resistance around 10k satoshis. The ~100% candle did, however, rocket price up into another level of resistance at 15k satoshis; a natural area for some consolidation after such a volatile move. The resistance of the previous range could now become a level of support, and perhaps a platform from which we will see further expansion towards the all-time high at ~23k satoshis. In truth, I believe any buys around here or below will likely be heavily rewarded over the coming months.

Thoughts: And, at last, we come to the potential goldmine. In last week’s Market Outlook, I commented on the volume activity on SALT. Today, we find similar activity on FoldingCoin… 21.4% of the circulating supply was traded in 24 hours (~$422k). Having been delisted from Poloniex, FLDC has suffered an extended decline over the past months, but has consolidated above 40 satoshis on its only exchange, Bittrex. Being listed on only one exchange is not ideal. We don’t like single points of failure. But, the reward is sufficient enough for me to take on this risk. Upside potential is well over 1000% in Bitcoin, let alone USD, and the fact that over a fifth of its supply was traded so recently suggests to me that smart money is buying here, and buying heavily.

That concludes the seventh Market Outlook. I hope you’ve found some value in it. Let me know your thoughts in the Comments, and I’ll do my best to answer any questions you might have.

If you’ve enjoyed this post and want to receive new posts straight to your inbox, I’ve set up a RSS-to-Email feed that will be sent out weekly; every Monday, 12pm. Just submit your email and I’ll make sure you’re included in the list. Cheers.